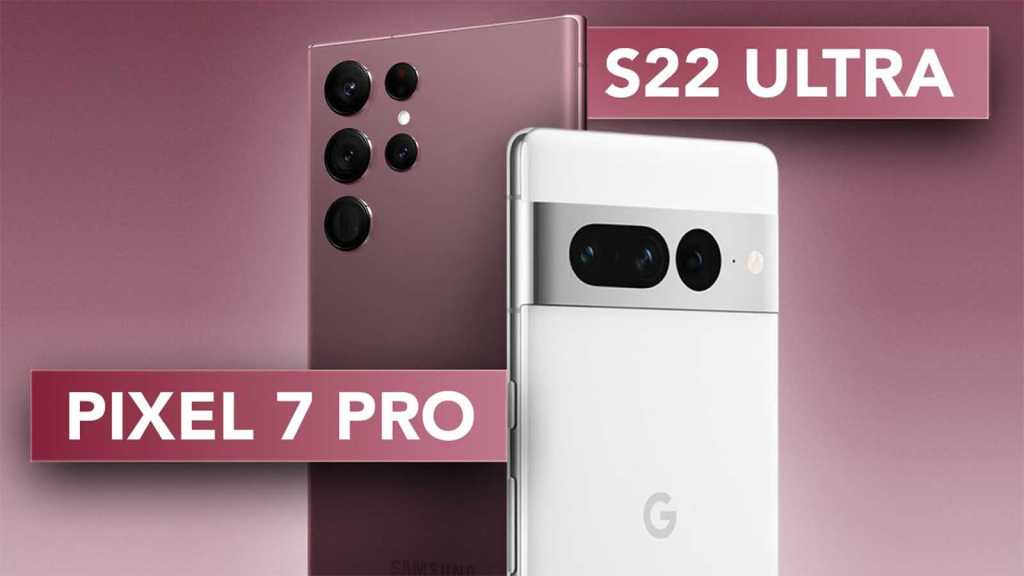 With the Pixel 7 Pro, Google launched its latest flagship smartphone, which at an RRP of €899 is significantly lower than what Samsung is asking for the Galaxy S22 Ultra, which starts at €1,249. So what makes the S22 Ultra better? Or can the Pixel 7 Pro do more for less? Here is the comparison.

With a penetration rate of 39 percent, Samsung is the most popular smartphone brand in Germany. Google manages only 2 percent. But it may also be due to the fact that Samsung has been in the market for a long time and has a wide range of models on offer. In addition, many users know Samsung from other product categories, while Google is more familiar to most of them being the search engine giant. And far fewer smartphone models come to market each year – Google can be compared to Apple in this regard.

Here you will find the current best prices for both models:

Design: First of all: both smartphones are very successful visually – but they are based on completely different designs. And Samsung said goodbye to the rear camera hump, as the individual cameras are housed individually in the case and protrude slightly. In fact it looks very neat and clean.

While most manufacturers build their camera setup horizontally, Google, like its predecessor, uses a horizontal arrangement. The cam hump is located in the upper third of the case and is drawn from left to right.

The Galaxy S22 Ultra has a large angle, and the Pixel 7 Pro is slightly rounded at the corners. Size-wise, the devices are hardly the same, and overall the S22 Ultra isn’t thicker, just a bit wider and slightly taller than the Pixel 7 Pro, though Samsung’s cell phone still has room for the S Pen in the casing.

Both smartphones are quite heavy. The fact that the Galaxy S22 Ultra weighs more at 228g than the Pixel 7 Pro at 212g is notable in practice, but hardly worth mentioning. In general, the devices are well balanced, the weight is evenly distributed, which is why the devices are comfortable to hold. But if you lie on the sofa for a long time in the evening, hold your cell phone in one hand and scroll through Instagram / Tiktok, you will clearly feel the weight.

an offer: Samsung has been the king of displays in the smartphone market for years. No wonder Apple, for example, also uses Samsung screens for its iPhones, as well as Google. Therefore, the quality of both screens is excellent. Both show great brightness, great black levels, and good colours. Both phones offer 120Hz max and WQHD+ resolution, which means content looks razor-sharp.

In a direct comparison, we note that the S22 Ultra’s screen has a bluer earlier work. To achieve a more comfortable viewing, you can adjust the white balance in the settings and set it warmer. The Pixel 7 Pro’s display is brighter and displays nicer colors for our taste.

In addition to face recognition, both phones also have a fingerprint scanner located under the display glass. Samsung uses an ultrasound sensor, and Google uses an optical scanner. The Galaxy S22 Ultra opens slightly faster than the Pixel 7 Pro. At least recognition is a bit faster compared to the predecessor Pixel 6 Pro.

You can’t just use your fingerprint to unlock a smartphone. But also to avoid having to enter a password for certain applications such as banking applications. Biometric authentication is secure.

We don’t need to beat around the bush: the Galaxy S22 Ultra with Exynos 2200 is much more powerful than the Tensor G2 chip developed by Google. However, this is focused entirely on AI and computer-assisted intelligent photography and less on maximum performance. True to the motto is “work smarter, not harder”. Yes, Google’s chip lags behind the competition on paper, but we don’t notice any weaker performance in practice, not even when multitasking. The device runs as fast and solid as the S22 Ultra.

Even though the Pixel 7 Pro is from Google, that doesn’t mean it also gets most of the major Android updates. Samsung actually offers longer updates – four guaranteed. It’s been three years since the Pixel 7 Pro. Since Google’s cell phone was already on the market with Android 13, both models will continue to receive Android 16.

Samsung wraps Android with its own OneUI user interface, which also offers some special features. For example, there’s Bixby, Samsung’s own voice assistant, though it’s not quite as powerful as the Google Assistant that’s also on board. A big plus is all the functionality of the S Pen that no other smartphone offers – after Samsung discontinued the Note series and integrated the S Pen directly into the Ultra models.

Samsung DeX is also great. If you connect the Galaxy S22 Ultra to a monitor, you will get a special desktop interface reminiscent of the classic work with a Windows or Mac computer. And the processor provides enough power to edit documents, retouch photos, and use multiple browser tabs.

The Galaxy S22 Ultra has a total of 4 cameras on the back – the main camera comes in at 108MP, then there are the 20MP zoom cameras and a 12MP ultra-wide-angle camera.

The Pixel 7 Pro comes with a 50MP main camera, a 48MP zoom camera, and also a 12MP ultra-wide-angle camera.

Google relies on 5x zoom – up to 30x digital. In order to achieve particularly high quality for up to 5x zoom, Google mixes image information from the main camera and the zoom camera. You can choose to zoom freely and get very powerful results. Again, we find details on the Pixel 7 Pro to be better and colors to be a bit more realistic.

With the S22 Ultra you have 5x and 10x zoom, the quality of the photos is good here too.

Both smartphones pack a 5,000mAh battery. However, since the Galaxy S22 Ultra supports a 45W power supply instead of just 30W for the Pixel 7, it charges faster. When we say “faster” we only mean in direct comparison. Compared to the current OnePlus phone, for example, which charges to 100 percent in 19 minutes with 150W, even the S22 Ultra is slow. It takes about 65 minutes, and the Pixel 7 Pro charges about 40 minutes longer. However, the Google Phone gets warmer than the S22 Ultra.

Even if the batteries were the same size, the S22 Ultra used more power. In practice, we’ve been with the Pixel for about 1.5 days. The S22 Ultra usually gives up the ghost between 1 and 1.5 days.

So – which phone is better now? Honestly, the devices don’t sacrifice much when it comes to basic features – battery life, performance, screen, camera – everything is on a similar level. But with smaller deviations in one direction or the other. Above all, the Pixel relies on smart features to make small everyday tasks a little easier – and of course, on the camera! Thanks to software support, it takes really good photos — sometimes even better than the S22 Ultra. It records with brute force and the S-Pen. You decide for yourself whether you need it or not. Very few will feel the performance. Anyone who uses a cell phone a lot for work and multitasking will definitely appreciate the S Pen.

If we had to choose between these two devices, we would mainly focus on the design and the price – both phones have top specs. However, you should also see that the Pixel is around €350 (RRP) cheaper than the Galaxy S22 Ultra. And this is really a lot of money! So if the extra cost is too high for you, with the Pixel 7 Pro you get a very cool, future-proof cell phone with a particularly powerful mobile camera second to none.