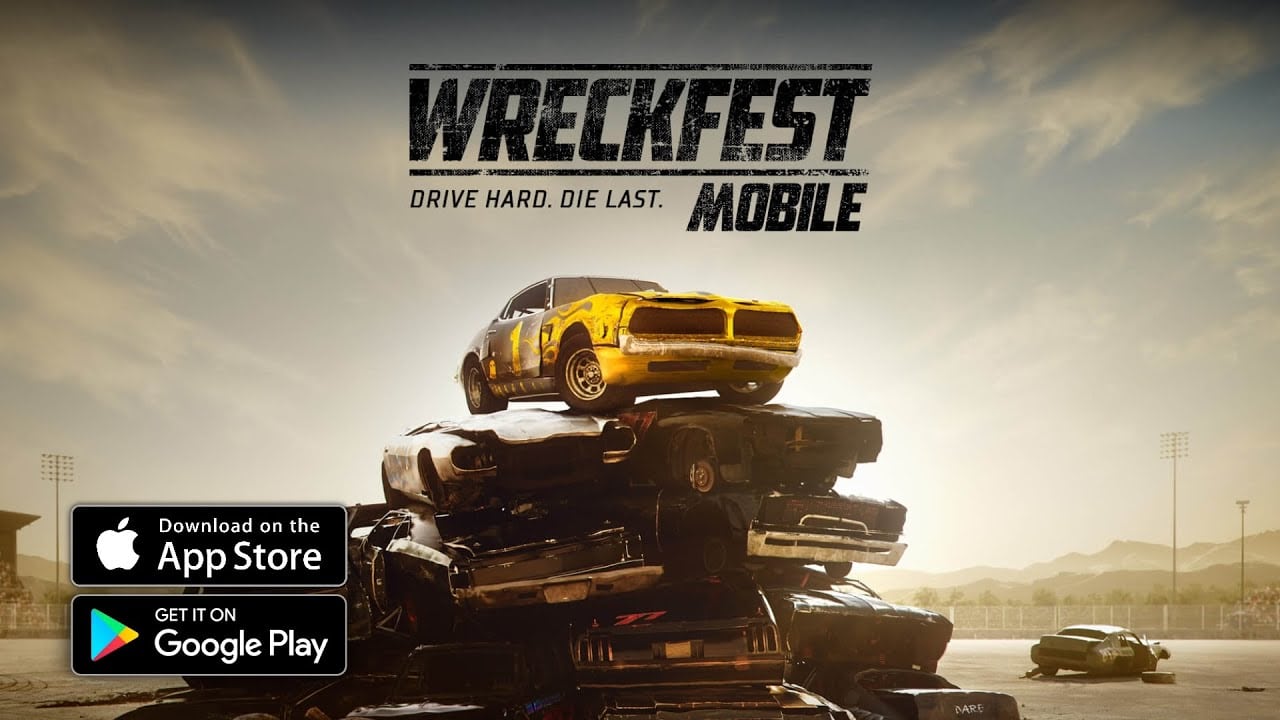 Wreckfest from Bugbear and THQ Nordic is a very physics based racing game with a massive destruction engine! Who knows the old racing games, Flatout 1, 2, as well as bits of Burnout must be more than just having fun with Wreckfest. Parts fly across the area after impact, vehicles are severely deformed after buildup, and yes, even drivers (dummies) fly out of vehicles in some places. Really cool demolition game.

Wreckfest game on the go

Wreckfest is developed by Bugbear and marketed by THQ Nordic. THQ Nordic should also be known to many here. But now we go one step further, because HandyGames, also part of THQ Nordic Company, has managed to make Wreckfest playable on our smartphones. More than just a playable game, it evokes the PC Wreckfest experience on our small screens. Wonderful! You have to imagine Wreckfest needs quite a bit of performance, especially because of the many vehicles in the game, all the destruction, effects, etc. Yes, Wreckfest needs reasonably powerful graphics, no, there’s no built-in RTX feature here, but the whole thing still runs smoothly, looks very detailed, and crashes pretty hard.

HandyGames are real artists, because restructuring everything on a semi-laptop computer is not easy. All content alone, content must make it to the end game. Exactly, we don’t have a lite version of Wreckfest here, no lite version of the super awesome game, and almost no lite version of the classic game. We get a complete application for the Wreckfest PC version from HandyGames. Goal. No deal! I find this impressive. Personally, I managed the port very well, again a reminder that it’s not always that developers manage a clean port like in this case, HandyGames.

Well, now we have written something about the port and about the content, but how do you actually play the game on a smartphone !? Yeah, we’re getting into that now, because HandyGames’ Wreckfest port doesn’t need to hide here either. No idea how, but it works smoothly on smartphones. Wonderful. Well, if there is a lot going on on the screen and depending on what you set in the options, stuttering can occur. But honestly, hand in hand, Wreckfest for smartphones, hello … this is a masterpiece! 60fps in just about every situation, on a smartphone, I’m pretty surprised. I admit I have a joker smile on my face, yeah! sinner.!

HandyGames and THQ Nordic are out of the range

Let’s move on briefly to the game itself, because here we can master several challenges, for which we get money for the course, and points. We are also level up, up to a certain point, and then completely flat. Challenges want to be completed perfectly, and it makes sense that there should also be the full reward. Later we can use our cars as pimps, or buy new ones right away. The scope is quite large and motivates the acquisition of all vehicles, as well as the disposal of each vehicle. There is a car for every taste here. Wreckfest has been very good to us and wants us to have maximum fun. He does too!

Racing in Wreckfest is quite different from other typical racing games, as the focus is less on realism and more on arcade. Don’t get me wrong, Wreckfest isn’t exactly a racing simulator, there’s still plenty of lanes in it for that, but it’s pretty close to a sim. Sometimes the destruction and its consequences are massive and require everything from you. Here nerves of steel are required. By the way, if you make a mistake while running, you don’t pay attention and you’ll find yourself in a ditch and most of your opponents will outrun you, or if you’re really unlucky, you’ll be knocked down. I’ll tell you, a really fun experience and it has it all.

Cars, parts tuning, performance in Wreckfest Mobile is excellent, which tracks should we choose from, or how does it work!? Yes, Wreckfest is not an open world title where we can now drive all the time. No, Wreckfest offers a huge variety of racetracks, arenas, and more. Hence it is the case that most tracks exist in various shapes, or can be pushed back, so that the tracks must be mastered against the mirror. Of course, this saves development time, as a much greater number of routes can be achieved without creating new routes from scratch. But hey, it doesn’t bother me at all!

Wreckfest is one of my favorite games and why? Simply because such a game only existed once. There are some good racing games out there, or Destruction Derby’s, but it’s nothing like Wreckfest. But we want to remain neutral and look at the game as if it was one of many. HandyGames has modified the graphics for Wreckfest. I mean who plays games on smartphone in 4k?? no one. The FullHD resolution may also be too big for our small screens, but yeah, HandyGames has definitely changed something in the graphics so that it can run smoothly on our buddies.

So the list of graphics is actually a bit more straightforward. We have one less option to adjust the graphics, which isn’t necessarily a negative now, just worth mentioning. The graphics are top notch, no doubt about that, and the performance is pretty good too. For a smartphone game that commands a base price of €9.99, it’s almost a gift. Admittedly, there are additional costs if you really want to see and get everything in the game, as the DLC, and expansions that can be made and purchased with a one-time purchase, are totally fair. There’s a lot of work involved here, and I’ve followed the development over time. The release date has already taken a lot of time.

There is one point I would like to address though, and that is Wreckfest’s multiplayer mode. Unfortunately, this is completely missing in the mobile version, as it cannot be integrated there for various reasons. It’s a shame, but it’s not a big deal for me as there is so much to do at Wreckfest. However, it would have been nice to welcome this mode in the mobile version as well. But I think the developers made the right decision here, because what’s worse is having a multiplayer mode and it just never works. Trouble was inevitable, hence the rating. Great job HandyGames!

What do you think about this topic?